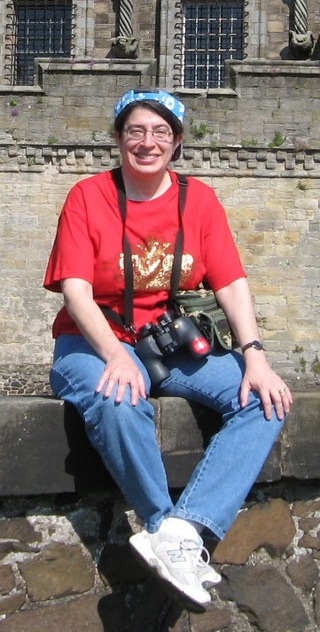 Birdwatcher: The Life of Roger Tory Peterson is available in paperback and as an e-book!

Listen to Ruth Beasley's review of Birdwatcher on High Plains Public Radio. Note that the petersonbird.com web site mentioned in the review has since been merged with this one.

Elizabeth J. Rosenthal's newest book, Birdwatcher: The Life of Roger Tory Peterson, was originally published in 2008 by the Lyons Press, which is now an imprint of Rowman & Littlefield. R & L re-released Birdwatcher (in paperback and e-book) in June 2015. This book chronicles the life and accomplishments of Roger Tory Peterson, the foremost environmentalist and naturalist of the 20th century. Besides inventing the first field guide to birds (and writing, illustrating and/or editing Peterson guides to a whole range of natural history subjects), he was an indefatigable writer of books, articles, essays, speeches, and scholarly papers; a wildlife artist and photographer; a public speaker; and a mentor to younger naturalists. He was tireless in his worldwide advocacy for birds and other wildlife over a period covering most of the 20th century. Birdwatcher: The Life of Roger Tory Peterson is the product of intense research, including interviews with nearly 120 people from all over the world, the study of the personal papers of many who knew Peterson, and the review of invaluable archives across the United States.

Elizabeth J. Rosenthal was born in New York City and grew up in the outer boroughs and then the suburbs, but left the area as an adult. She still has a strong, emotional attachment to her city of birth. It may sound odd, but for her, a spring breeze, the sight of fire escapes on aging apartment buildings, or the aroma of a sizzling grilled-cheese sandwich may excite nostalgic images – the end of a long school year, the approach of home after a long day out, or a meal at the local luncheonette, replete with art deco counter and stools.

In the third grade, Rosenthal discovered that she loved to write. New “vocabulary words” were an excuse for her to compose long sentences and longer stories. In high school, she edited the school paper, which eventually led to the pursuit of a journalism degree. After graduating magna cum laude in 1982 from Syracuse University’s Newhouse School of Public Communications, she attended Rutgers-Camden School of Law, receiving the AmJur Award for Constitutional Law and graduating with Honors in 1985. Subsequently, she was admitted to the bars of New York, New Jersey and Pennsylvania. In 1986, she married Stanley Shur, another Rutgers law graduate. A longtime legal liaison for the New Jersey Civil Service Commission, she retired on July 1, 2015 and has been writing from home. Recently, she became a Trustee of the Historical Society of Moorestown (NJ).

Birdwatcher has been widely praised, most notably in The New York Review of Books, Minneapolis Star-Tribune, Pittsburgh Post-Gazette, and other publications.

Rosenthal's first book, His Song: The Musical Journey of Elton John (Billboard Books, 2001) resulted from a fascination with popular music and, especially, the superb music and musicianship of Elton John. His Song is the most thorough musical biography of John ever written. It was the only John biography sold in the Elton John Store at Caesars Palace, Las Vegas, during his “Red Piano” residency. It is also the first John biography to be translated into Russian.

Rosenthal has contributed to a variety of print publications and blogs. Among them are the following:

“Elton John and Ray Cooper at the Royal Opera House.” Official Program of the Charity Concert in Aid of the Royal Academy of Music Organ Appeal 28 January 2011.