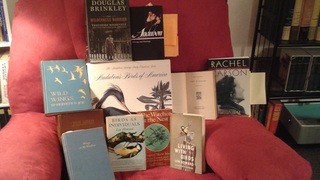 What a load of bird books!

Reading what I consider “classic” bird literature—dating from the 19th century or the early-to-middle 20th—is a favorite pastime, almost as enjoyable as experiencing birds firsthand. I not only learn about birds, but can reflect on the development of human attitudes toward them.

Sometimes, the writers of these pioneering books engage in the big no-no of ornithology, anthropomorphizing their avian subjects. One is supposed to look askance at this practice, but it can be irresistible. Take English bird-lover Len Howard who, from the 1940s through the 60s, opened up her home in Ditchling, Sussex, to wild birds, among them Great Tits, Blue Tits, and Eurasian Blackbirds. She was a terrible offender in the realm of assigning human emotions to her flighty guests. One star of her 1952 Birds as Individuals, a female Great Tit she calls Curley because of the bird’s abnormally “ruffled” crown feathers, is ashamed, according to Howard, of having “very small feet,” which are inadequate for fending off rivals. In the later, soap opera-ish Living with Birds (1956), Howard describes the attempted murder via kitchen drain-drowning of one female blackbird, Darkette, by Stubbs, a jealous competitor for the affections of a flirtatious male named Weaver. The male’s beautiful songs, during which he romantically mimicks the “weaving” of a nest, drive the girls crazy.

Yet Howard’s observations of the birds’ differing personalities and clever antics, which were objectively verifiable, won praise from evolutionary biologist Sir Julian Huxley and the Father of the Modern Field Guide, Roger Tory Peterson.

It’s not the anthropomorphizing of bird behavior that bothers me—one can usually sort through it to isolate facts—but misbehavior on the part of some birding VIPs of yesteryear. Perhaps the most benign act John James Audubon took concerning birds was trying to abscond with baby Mallards as their mother rolled around on the ground in distress. Mama Mallard’s importunate display, he claimed in his 1830s Ornithological Biography, finally dissuaded him from removing the little fluff-bundles from her care. In general, however, as Peterson would later reflect in The Audubon Society Baby Elephant Folio (1981), Audubon was “in blood up to his elbows,” adding that the artist-hunter “once said that it was not a really good day unless he shot a hundred birds.”

President Theodore Roosevelt, a devoted birder who wrote prodigiously for most of his life about his naturalist’s exploits, was also a notorious big-game hunter. Sensitive to criticism from John Muir on this account, as Douglas Brinkley relates in The Wilderness Warrior (2009), Roosevelt considered changing his trophy-seeking ways. Instead of doing that, he established or expanded 150 national forests, and initiated 51 federal bird reservations, four national game preserves, six national parks, and 18 national monuments. One of his favorite birding companions, John Burroughs, for whom a prestigious nature writing award was named, could himself engage in regrettable behavior.

Burroughs was a U.S. Treasury Department clerk in Washington DC during the Civil War. He recalls in Wake-Robin (1871) that, around the time of Lincoln’s Second Inaugural, Common Grackles were especially numerous in the trees near the White House, “their polished coats glistening in the sun from very blackness,” while the “air … [was] filled with crackling, splintering, spurting, semi-musical sounds.” Watching the activities of one grackle pair on the Capitol grounds, Burroughs writes: “The female always had her beak loaded with building material, while the male, carrying nothing, seemed to act as her escort, flying a little above and in advance of her, and uttering now and then his husky, discordant note.” He recalls his regression to boyishness at that moment, when he tossed a “lump of earth up at them,” which caused the “frightened mother bird [to drop] her mortar, and the pair scurried away, much put out.” He knows he shouldn’t have done it: “Later they avenged themselves by pilfering my cherries.”

The great Rachel Carson made many acquaintances during her too-brief life. Among them was Ada Govan, a Massachusetts bird-bander and writer of Wings at My Window (1940), a chronicle of Govan’s relationship with backyard birds which hastened her convalescence from hip and spine arthritis. According to Carson biographer Linda Lear (Witness for Nature, 1997), the Silent Spring author avidly corresponded with Govan for years about their love of birds. Lear credits one of Govan’s chapters in Wings at My Window, “Children into Bird Lovers,” with influencing an article that Carson later wrote called, “Help Your Child to Wonder.” But what could Carson have thought of another chapter in the same book, “Enemies of the Kingdom”?

Govan doesn’t hide her bias against certain birds. In “Enemies,” she complains of Blue Jay bullies who drive away some favored species, like Purple Finches and Rose-Breasted Grosbeaks. Trapping 15 juvenile jays, she educates the first youngster by repeatedly crashing a couple of “cake tins” together over the bird’s head. “Before he could recover,” she continues, “I scooped him out of the trap, gave him a shake, turned him upside down, and clamped the band on him…. The bold jay eyes were snapping with terror.” After apparently affording the other jays similar treatment, Govan reports with satisfaction that they “rarely bothered” her feeders.

A self-proclaimed protector of songbirds, Govan still treats jays better than birds of prey. “We were raided by hawks and shrikes,” she notes, “and the slaughter of our innocents was so dreadful I was in despair.” The crisis worsens when a flock of Evening Grosbeaks visits her feeders on successive cold, stormy February days while the threat of a shrike strike is ever-present. When a hawk kills a goldfinch, Govan turns her gun on it. One winter, she shoots seven shrikes and two Sharp-Shinned Hawks.

A contemporary of Govan’s, whose reputation endures in ornithological scholarship, is Margaret Morse Nice. Known especially for her studies of breeding Song Sparrows near her Columbus, Ohio, home, she also wrote in The Watcher at the Nest (1939) of nesting birds at her property in Pelham, Massachusetts. Enchanted by a pair of Magnolia Warblers with an active nest in a juniper, she worries about a nearby red squirrel. “A curious change had come over me during these days of watching the little brood,” Nice admits. “Before this I had never felt any enmity towards red squirrels, and although I knew from my reading that they robbed birds’ nests, I had never felt called upon to interfere. But now it was impossible for me to remain an impartial observer.” That afternoon, Nice’s professionalism surrenders to passion; she gets her shotgun. “A rustle in the blueberry bush announced the arrival of the enemy; a few moments later that menace was ended and a great load had been lifted from my mind.” But the gun’s noise alarms the mother warbler, who, days later, is still so “agitated” at the sight of the ornithologist that the bird can do little but scold. “She devotes her whole mind to protesting against me.”

Bird photographer Herbert K. Job, whose birding adventures recounted in Wild Wings (1905) inspired a young Roger Tory Peterson, was also, like Burroughs, a friend of Theodore Roosevelt, and a passionate conservationist. Long passages in Wild Wings are devoted to condemning the loss of habitat and, most vociferously, the millinery trade, which decimated the ranks of shorebirds and waders for their plumes at the turn of the last century. Still, if Job had to really bother a nesting seabird so as to photograph it, Job was little bothered.

On Seal Island, off the coast of Nova Scotia, Job took pictures of Herring Gulls, Black Guillemots and an unfortunate Leach’s Storm-Petrel trying to incubate its “single white egg” in a burrow. He writes of the adversity the Leach’s faced every day: stray cats “fat and flourishing,” a dog “chewing up a poor petrel.” (“Poor birds!” he laments.) But Job has a job to do, and does it. “When I undertook to pose and photograph one [Leach’s] that I had dug up for that purpose,” he relates, “I had to resign myself to a two hours’ struggle with a ceaselessly active automaton that could do nearly everything except keep still.” Two pages hence one sees the result, a picture of the presumably exhausted bird outside of its burrow, on the mostly bare ground, with perhaps little strength left to resist roving stray cats or dogs.

The “Right Honourable” Malcolm MacDonald, as he is identified in his The Birds of Brewery Creek (1947), was British High Commissioner in Canada during the Second World War, which allowed him to observe the movements of migratory birds in a swampy area near his temporary Ottawa, Ontario, home. A bird admirer on both sides of the Atlantic, he once entertained the idea of submitting a humorous counterpoint to a letter that then British Chancellor of the Exchequer Neville Chamberlain had published in The Times of London, in which Chamberlain reported his sighting of a Gray Wagtail in St. James Park. In MacDonald’s response, the wagtail would have written to The Times to report the sighting of a Chancellor of the Exchequer in the same park. During MacDonald’s Ottawa stay, his favorite hobby in spring and summer entailed locating active bird nests, walking up to them, and peering inside to see how the eggs or nestlings were doing. Once, a Gray Catbird, mother to scrawny, nest-bound babies, emitted a “blood-curdling wail” and “flew” at him, “flapping her wings violently and fluttering round me as if she were going to make a bodily assault upon me.” While the nestlings from this brood fledged, MacDonald acknowledges that another catbird nest he was closely watching came to a sad end: “despoiled, robbed and empty.”

Such tragedies can be instructive. “However careful one is when watching a nest, one cannot help leaving traces, such as footmarks in the grass, which may attract the attention of predatory birds or beasts and lead them to their quarry,” MacDonald realizes. “For these reasons, the casualties among my Song Sparrows were probably more numerous than amongst their better concealed neighbours.” After the war, MacDonald left Brewery Creek; his “footmarks” never betrayed another Song Sparrow nest.